Like the stepped joint that I discussed in my previous post, the sawtooth stepped joint is not something that the amateur builder will make from scratch. It may be that this joining method will be a feature of a kit that the amateur builder buys from a kit supplier, so he may do the final assembly of this joint without cutting the shape into the plywood.

This is a modification of the stepped scarph joint. The only difference is that instead of  the straight-line plan shape of the joint, it has a sawtooth plan shape as can be seen in the photo below. The form  in the photo is a true sawtooth shape, with straight lines between the changes in direction of the cutting tool. A variation is for the steps to have a wavy form composed of a series of curves instead of the sawtooth form. 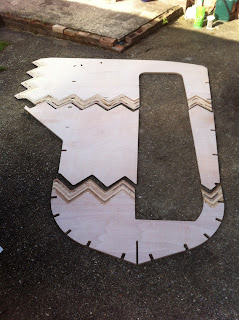 This bulkhead in the photo is from a kit for the Dix 470 catamaran, cut by Exocetus Catamarans in UK.

These joints were developed primarily to get around the alignment problems of the straight variety of stepped scarph. The components that are being joined can easily slide relative to each other, parallel to the steps. The toothed or wavy form of the joint allows the two components to interlock accurately. As long as there is pressure to push the joint together when is is clamped then it will engage accurately.

There is a side benefit to this type of joint that is particularly beneficial to larger boats, with large loads in the structure. The form of the joint does a better job of distributing the loads between the two boards that are being joined. There is a much reduced chance of the joint initiating a crack along the line of one of the surface joints. Nevertheless, joints should be positioned away from the corners of openings and other stress-raisers in the bulkhead or whatever component is being made.

To see our range of designs, go to http://dixdesign.com/ .

I have been designing boats professionally since 1979 when I won the Cruising World Design Competition. As an amateur boatbuilder myself, my roots are in amateur boatbuilding. I have drawn many designs that are suited to building by amateurs and even first time builders. My preference is for fast boats, so even my cruisers display a good turn of speed.